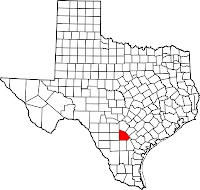 Atascosa County is south of San Antonio on Interstate Highway 37 in the Rio Grande Plain region of south central Texas. Jourdanton, the county seat, is located on state highways 16 and 97 in central Atascosa County thirty-three miles south of San Antonio and 100 miles northwest of Corpus Christi.
The largest city in Atascosa County is Pleasanton with a population of approximately 8,266 persons. The population density is approximately 31 people per square mile. The median income for a household in the county is approximately $33,081. Other cities include Poteet (pop. 3,305) and Charlotte (pop. 1,637).
The county covers 1,218 square miles of level to rolling land. Elevation ranges from 350 to 700 feet. The soils are generally deep with loamy surface layers and clay subsoils. In Atascosa County, the subtropical dry land vegetation consists primarily of cactus, weeds, grasses, thorny shrubs and trees such as mesquite, live oak and post oak. Approximately 40 to 50 percent of the county is considered prime farmland.
Wildlife in Atascosa County includes white-tailed deer, javelina, turkey, fox squirrel, jackrabbits, foxes, ring-tailed cats, skunks, and possums. The main predators are bobcats and coyotes. Ducks, cranes, and geese migrate across areas of the county. Many stock tanks are stocked with catfish, bass, and sunfish.
Mineral resources include clay, uranium, gravel, and oil and gas products. Other minerals and products include caliche, lignite coal, construction and industrial sand, and sulfur.
The climate in Atascosa County is considered subtropical. The winters are generally mild and the summers can be very hot. The average annual temperature is 70°F. Temperatures in January usually average a low of 40° F to an average high of 65°. and in July range anywhere from 74° F to 97°F. The average annual rainfall is approximately 27 inches. The average relative humidity normally ranges froma low of 51 percent to a high of 86 per cent. There is no significant snowfall that occurs in this county. The growing season averages 282 days a year. The sun shines an average 65 percent of the daylight hours which is good for solar power applications.

Major highways in Atascosa County include Interstate 37, U.S. Highway 281, State Highways 16, 85, and 97.
Additional information about Atascosa County can be found here:
http://en.wikipedia.org/wiki/Atascosa_County,_Texas
Be aware. Be informed. Be prepared.
Riverwalker
Posted by Riverwalker at 1:24 PM